Who is Broadband Infraco?

Broadband Infraco is a new State-Owned Enterprise (SOE) that will sell high capacity long distance transmission services to licensed fixed and mobile network operators, internet service providers and other value added network service providers, which they can either use for expanding the reach and capacities of their own networks or resell on to their customers…. READ MORE

How can I apply for a position in Broadband Infraco?

Vacant positions are advertised on Broadband Infraco website ( the section on career opportunities) and print media. Potential candidates who meet the requirements of the position can send their applications to…. jobs@infraco.co.za

Is Broadband Infraco BEE Compliant? What is its BEE compliance status?

An external BEE Verification Agency is currently assessing Broadband Infraco’s BEE status. The outcome of the assessment will be available as soon as the verification process is completed.

I am a VANS / ISP can I get a wholesale service from Broadband Infraco?

Broadband Infraco is an ideal partner to connect the network of any ICASA licensed operator to the world through its next-generation, fully meshed carrier-class network. To enquire about services from Broadband Infraco, you can call us on +27 11 235 1600 or email us at: info@infraco.co.za

Does Broadband Infraco network depend on Telkom’s Network?

Broadband Infraco has a completely independent network from the Telkom network. This will offer customers a true alternative choice of long distance service provider with a completely different risk profile to any existing network they may be using.

Will Broadband Infraco offer voice Telephone Services to my home or business?

What is the current size of the Broadband Infraco network and where is it?

Broadband Infraco has a growing long distance network that spans more than 12,000km of optical fibre based routes between all the major towns and cities across South Africa and extends to all the borders of the neighbouring states of Namibia, Botswana, Zimbabwe, Mozambique, Swaziland and Lesotho. Broadband Infraco also has a Point-of-Presence (POP) at the East Coast submarine Cable landing stations in Mtunzini.

As the ‘on-ramp’ to the information super highway, Broadband Infraco operates from Open Access Points-of-Presence (POP’s) in the major centres. These data centres or Carrier Hotels offer Broadband Infraco and its customers a Carrier-Class hosting facility where bandwidth services can be easily exchanged in an open access environment.

How can I become a reseller / distributor for Broadband Infraco's services?

Broadband Infraco has published products and tariffs. Anyone who would like to buy these products and repackage or add value and sell into the market is welcome to do so. The entity would have to be adequately licensed.

How can I register as a supplier for Broadband Infraco?

Are the mobile companies also competitors to Broadband Infraco because of the convergence of telecoms services?

Do you see the mobile telephone companies as potential customers for Broadband Infraco?

What are your licence requirements for reaching into remote and rural areas, and how and when will these conditions be met?

As part of Broadband Infraco’s licence conditions, we are required to roll out our network by establishing points of presence (PoPs) in previously underserved areas. The establishment of a PoP in an area means that other licensed operators can access a reliable, national backhaul network by connecting their last-mile network to our PoP, and then provide electronic communications services to these communities. We are required to roll out thirty-seven PoPs over the next seven years. We are working closely with the industry, the regulator and government to make sure that we, not only meet our licence conditions, but also fulfil important policy objectives set by government.

How will Broadband Infraco's wholesale services benefit, or be noticed by, business and home consumers?

By introducing its competitive and carrier-class long distance service offering into the wholesale telecommunications market Broadband Infraco expects to see consumers and businesses getting an improvement in value for money for their broadband and general wide area network based services,

What products / services are now available from Broadband Infraco?

Broadband Infraco’s services are based upon the provisioning of high capacity managed bandwidth from Point of Precence (POP) to POP within our National Long Distance fibre-optic network.

Services are Synchronous Digital Hierarchy (SDH) based and available in the following bandwidths and multiples thereof:

Services can also be delivered in Ethernet format in the following bandwidths and multiples thereof:

What Service Levels are available? 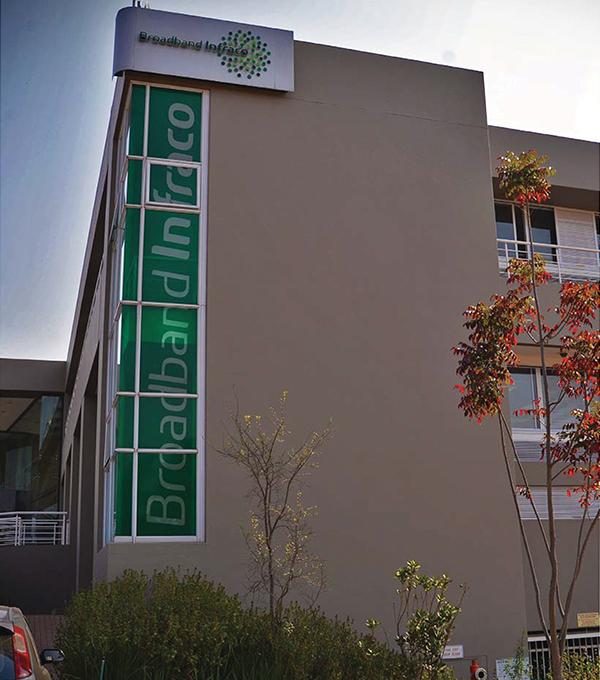